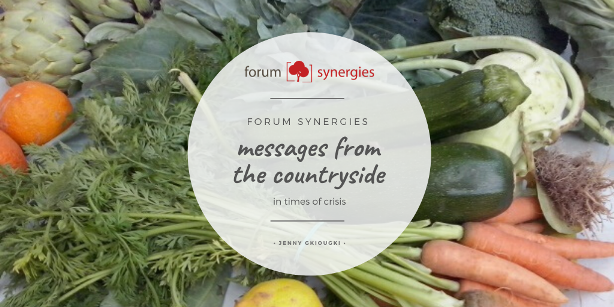 Small agroecological farmers were hit very hard by COVID-19. Strict restrictions in movement and the provisional closing of many businesses meant that places like small restaurants, hotels and farmers’ markets suddenly became inaccessible for most of them -who do not receive subsidies or compensations and rely on short supply chain for their survival. This is critical, not just for their livelihoods, but for the continued existence of family farming in Greece. CSA farmers, who usually operate in more local scale, also faced difficulties as in many cases they were not allowed to travel and had to use the services of already overwhelmed delivery companies instead, adding cost and subtracting quality from their produce. Furthermore, most CSA schemes in the country, until now, are informal, there is no ‘contract’ signed between the two parties, and there is no formal national association to promote, or advocate for their interests.

The movement restrictions served to highlight many underlying pathogenicities pertaining to the agricultural sector and food production in Greece, but also to bring forth how the globalised food systems we rely on can collapse, and how the most effective solutions for food security, let alone food sovereignty, have got to be based on the foundations of agroecology and localisation. The consumers were suddenly faced with a new reality : that the place were the majority of them procure their food (the supermarkets) is not safe any more, and that foods purchased there will have to be washed with soap in order to eliminate the possibility of getting infected. The problematic of a food system fraught with intermediaries is showing its face again, not in terms of profit accumulation, but in terms of endangering public health.

Agroecopolis -The Hellenic Network for Agroecology, Food Sovereignty and Access To Land (AEP) instigated an e-meet with small producers from all over the country in mid-March ; with representatives of organic growers’ associations, members of EcoFest networks and individual farmers, in order to assess the situation and decide on collective action, as assembly. As an urgent and immediate response, it was decided to run a nationwide digital and social media campaign promoting local direct links between producers & consumers all over the country.

Within a few days, a collection of food activists with no direct personal gain, under the coordination of Agroecopolis, started developing the campaign and were even able to create a short promotional video while being unable to shoot new footage ! We all came together because we realise the importance of standing by our farmers ; now more than ever ! Out of the blue, without any access to resources or prior organisation, at a time of extreme uncertainty, we were able to organise four different groups, working on aspects of the campaign, including content creation, dissemination, liaising with producers and organising the final ‘match-making’.

The main message of the campaign is : #Support local small food production# #We are staying in our fields and cater for your household needs#. We aim to reach a much larger audience than the ‘usual receptors’ of similar actions organised by eco-activists and bio-farmers in the past. We are addressing the average coronavirus ‘quarantinees’ : consumers living in urban setting (from big cities to small towns), who are now, concerned about the safety in big crowded stores ; are interested in eating healthy ; and wish to protect and cater for their families in times of uncertainty. The campaign will run till July, each week focusing on a different aspect -why it is important to eat locally ; why agroecology is the solution ; showcasing producer profiles from different areas, etc.

As this is an urgent mater, and not a planned campaign, it is quite tricky to organise resources and create a model that works, immediately ! Our first goal is to make sure ‘not one more leaf rots unpicked in a field’. Drawing from the principles of Community Supported Agriculture (CSA) and Reko (The Finnish alternative), the interested consumers in one locality and the chosen producers (experienced volunteers have created a ‘vetting system’ to make sure they comply to the same principles as us) are brought together using Facebook groups, where our volunteers set up each group, instigate interaction and monitor first steps until members take over and self-organise. The idea is to promote self-management of needs and citizens’ mobilisation on local level -thus creating conditions for higher levels of autonomy and food sovereignty in local terms. We have teams of volunteers working on the creation of content and the dissemination of the campaign so it generates responses from consumers all over Greece, and we aim to have groups in each major city, in each prefecture, by the end of June, to make sure all these small farmers are supported by networks of consumers. In the first four days of going ‘live’ we’ve had more than 400 responses from consumers and the goal now is to make sure we can match demand with supply.

This project started as an immediate and urgent response to the fact that small bio producers everywhere in Greece are facing difficulties accessing markets due to corona restrictions. It aims at connecting, on a local and direct level, producers and consumers in all prefectures of the country, so their sustainability is assured. But, it will also serve as fertile ground for the creation of PGS (Participatory Guarantee Systems) and CSA (Community Supported Agriculture) networks that will further solidify the Food Sovereignty movement on a national level -a necessity in the uncertain times that are coming, in a country that has already been exhausted by the ongoing, ten year economic crisis. For more info, or to join the campaign visit https://www.agroecopolis.org/covid-19/ (only in Greek)

You can download the fullarticle -which includes some facts on the Greek situation and publish all or part of it.