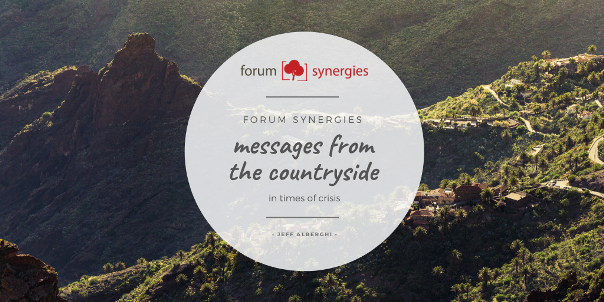 The aim of #EncuentrosPeriféricos is to break the isolation of cultural, social and/or educational agents who work in rural areas. It generates spaces and moments of gathering between these actors so that they can get to know, exchange ideas, inspire and support each other.

The lockdown of Spain -since March 13th - sets out a radical change in the paradigm of rural peripheries. In a few hours, they went from being forgotten territories to becoming refuge areas to get away from the epicentres of the health crisis. As the meeting (although virtual) is the best weapon to fight isolation, we decided to continue organising these peripheral meetings adapting to the rules imposed by the situation : developing mechanisms and using technological tools that allowed us to communicate, to learn about local initiatives and to follow networking between people and change-agents. Since then, three peripheral meetings have been held virtually where local initiatives were presented and training sessions were offered. The project should close on April 10th with the sound happening “Deja que te cuente” (Let me tell you). However, we have decided to follow holding virtual meetings based on training needs and presentation of initiatives proposed by the participants.

Towards New Peripheries This new situation created by the containment for health reasons has allowed us to stop, reflect and be aware of the broader interpretation that can be done of a simple “encounter” or meeting. After talking with people already involved in the project as well as other ones related to local development in different territories, we have become aware that not only physical meetings are necessary (although they are fundamental for direct contact as peers and to share informal moments) : we could broaden our scope of activitity through the on-line meetings. These 2-hours virtual meetings have allowed the attendance of interested people from the territory who were not available a whole Saturday. They have also allowed to meet other people and projects, cover more territory and thus to follow networking around shared interests. They are also a way to maintain the initial objectives of the meetings such as presentation of local initiatives or training sessions that have been useful not only for the local projects but may also have inspired other participants. These virtual meetings also open complementary perspectives to the strategies implemented locally : we can organise meetings and generate collaborations between initiatives and groups that may be physically distant in Spain or in the rest of the world or even in the same rural territory when travelling may be difficult. The online sessions of the #EncuentrosPeriféricos are available online, as well as the materials being worked on or presented, which are under a Creative Commons license.

As I write this, it is still difficult to predict what impact the pandemic and its consequences will have on rural areas, but it is very likely that the current paradigm will change quite a bit and that these areas will have to reinvent themselves at a fast pace in order to welcome and integrate new populations in search of healthier and more sustainable ways of life.