Rural topic(s): Places to be (work in progress) 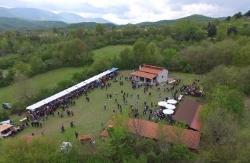 Peliti is a Greek seed savers movement and an organisation, working on the collection, conservation and distribution of traditional seed varieties. Peliti was founded by Panagiotis Sainatoudis in 1995 and has since then organised the Peliti Seed Festival and the Pan-Hellenic Network for the exchange and rescue of traditional varieties. The seed festival usually takes place at the seed bank of Peliti every year during the week after Greek Easter. Peliti has ten local seed saver groups in various regions of the country, organising seed festivals, events to raise awareness, and undertake seed multiplication. Seeds from Peliti are distributed free of charge.