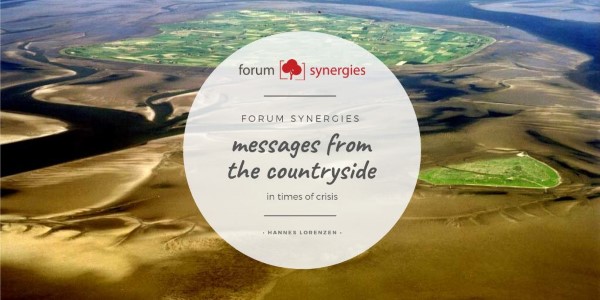 Corona, time and us, Pellworm, DE

Time is setting new standards now. A moment ago we had hardly any time for this and that. Then suddenly time stood still. And now it is already pushing us forward again: How much longer until our accustomed life comes back? When will the vaccine and the medicine arrive? When can we get back together as before without feeling the virus in our necks?

When the crisis suddenly hit us, we wanted to have time for ourselves: Who and what comes first now? How much time do we have to organize ourselves in the family, to support those who need help, parents, children, neighbors, friends. Living in a safe distance, protecting health, providing food. So far it all seems to work out. And we have also come closer to each other in the threat we feel. But immediately after that comes the anxious question about what comes after: about our work, the money that is missing, the business that has to run, the whole economy that is now frozen.

At first the standstill seemed restful, - less stress, - less speed. But now it not only makes parents nervous, who are locked up with their children in small apartments. Every week, the World Economic Institute in Kiel calculates that the German economy loses 35 billion euros of its gross national product when it comes to stagnation. That is about as much as the new investments that were estimated as recently as January of this year to be necessary each year to start restructuring the German economy, that is, to be able to combat galloping climate change. Now the entire economy is expected to collapse in trillions of euros. The sums for aid programmes are doubling faster than the corona infection rates. What is now being advanced by the state to save the economy - as we know it up to now - will have to be earned again at some point. What kind of economy will that be? Business as usual certainly not.

On the other hand, the pandemic has time. It is to be spread out over time, will retreat and then come back. Virologists, epidemiologists, ethicists and politicians have explained this to us, and we have followed their warnings and cut off contacts. What this pandemic period will do to us socially is still uncertain. It is not yet clear whether we will come closer to each other in spite of or because of the pandemic, or whether we will move further apart in our everyday lives. Whether we will be able to turn the corner to more cohesion, justice and respect for nature remains to be seen.

From the outside, Pellworm could now look like the island of the blessed. Closed to the virus, springtime without vacationers, no stress. But it’s not like that. The problems of the time before and during Corona are not gone. The question is how we use the Corona time to come together economically, socially and ecologically. These were and are the topics of our association "Ecological Economy! Our commitment has become not less important in this crisis, but more urgent. The "Ökoverein" was never just "eco", but a project for community, among ourselves and with nature.

It is only two years ago that we practiced community thinking during our "Ökowoche", which was not only "eco" but also created space for future perspectives for all. From this, new projects have emerged, which we have continued to pursue as an association, but also as individual members, for example in the context of community work, the biosphere programme or the material flow project. For June we had planned a new "ecoweeks". It will be different than we thought. In all probability we will not be able to gather on Pellworm. But we should not give up the opportunity of a meeting of any kind. Video conferencing and webinars make this possible.

The programme - as we had planned - includes lectures, films and discussions. Round tables can also be organised virtually - with due distance. The ideas from the study by Ulf Hahne and his students on the future model Pellworm remain current, as does the material flow analysis of the Thuenen Institute. The project Resilience, i.e. the resilience of villages in a crisis, is becoming important with regard to local supply structures. And the theme of the long night of farm films " I like being a farmer and would like to stay one" remains topical, because agriculture will be changed by the Corona crisis.

It would be nice if we could include the biosphere round table "Agriculture - Man - Nature", the meadow bird protection programme and the tuetterland project in the programme, and perhaps add a breeder initiative that deals with climate-friendly adapted cereal varieties.

As I said, the pandemic sets different standards. How we use our time is our choice. Time can push us, run away, or get lost. We could also use it.